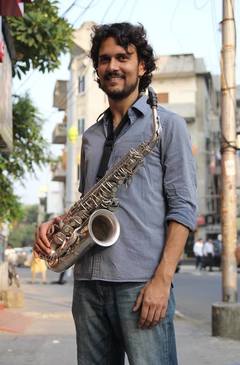 Hailed as “A fiery alto saxophonist and prolific composer” by the Star Tribune (Minneapolis), Aakash Mittal is emerging as an expressive artistic voice. His self-released album, Videsh, has been regarded as, "point[ing] toward new possibilities in improvised music." (The Denver Post) As a composer and improviser, Mittal employs colorful dissonances, meditative silences, and angular rhythms to express environments and spaces ranging from the American west to the dense streets of Kolkata.

As a composer, Aakash Mittal has written extensively for jazz quartet composing over fifty new works. Other commissions include, Urban Raga (2011), Transitions (2011), and Questions of Identity (2012) for the Playground Ensemble; Octet on Raga Yaman (2009) for the Ethos West Chamber Orchestra. In 2012 Mittal wrote Meditation for Pictures on Silence saxophone and harp duo. As a leader, Mittal has self-released four recordings, Possible Beginnings, Videsh, Thumbs Up EP, and Ocean to rave reviews.